In this article, we will cover all of these changes.

To date the system has managed reporting of certificates in the NAT130 file through the Qualification Issued and Statement Issued flags viewable in the Admin panel of any enrolment:

Generally these fields would be set automatically as a Qualification or Statement of Attainment was created. If a Certificate was not reportable then it would be necessary to edit the enrolment and disable the flag so that the award would not be reported. In addition to that, users had no functionality to determine in what year a Certificate would be reported.

Instead of a check boxes to show whether a Qualification or Statement has been issued, we now show a date next to the Completion Issued or Non-reportable Statement when one has been recorded. This field is also hyperlinked to the award so that you can access a copy of the award in a new tab, directly from the enrolment. If you have issued multiple certificates, only the most recent of each type will be displayed. These fields are no longer editable in the enrolment edit page, but can be edited directly from the qualification if necessary.

For users who record award in an external system you can now also record that information in the system without having to create an actual document via the Record External Award, more on that below.

Reportable: This field can be found via Certificates List → Edit Certificate, there is now a checkbox named Reportable. Having this checked will allow the certificate to appear in the NAT00130 file and subsequently be reported to the government. This is simply a label change from the old Enabled field and hopefully better reflects its intended purpose for users. 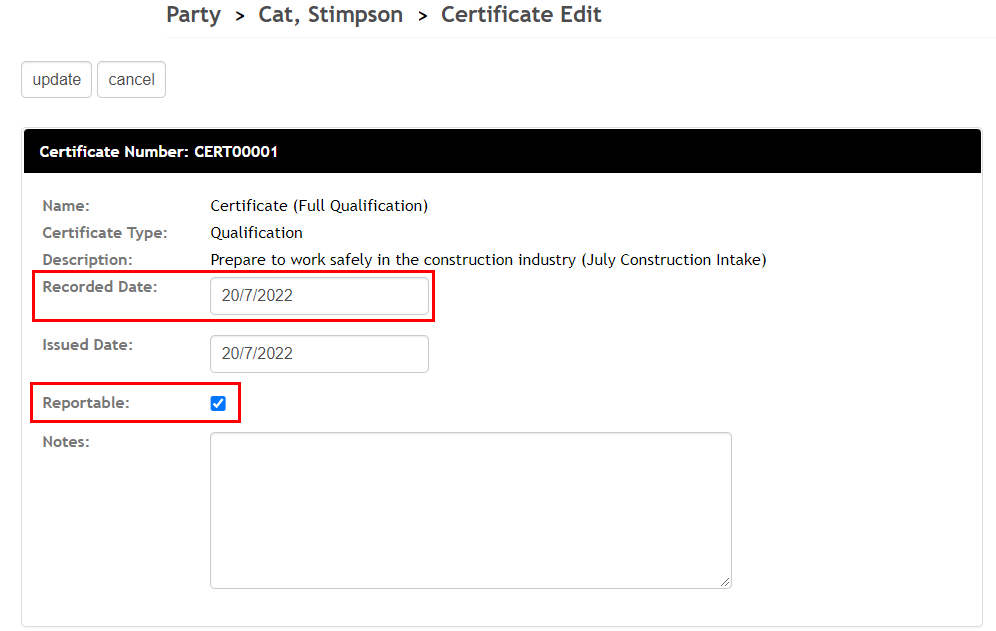 On release, the Recorded Date field will be populated for all Qualifications issued in the system to match the date the Qualification was recorded. This was not previously accessible from the user interface.

Previously when generating a Certificate the user had little control over some of the individual settings for that Certificate until after that Certificate had been created. We have now enabled functionality that will enable users to manage these fields as the Certificate is being created.

The Certificate generation process has been broken into separate steps.

As before, the process is started by choosing the relevant Certificate Template. With the new process though, users can now specify other data related to that Certificate: 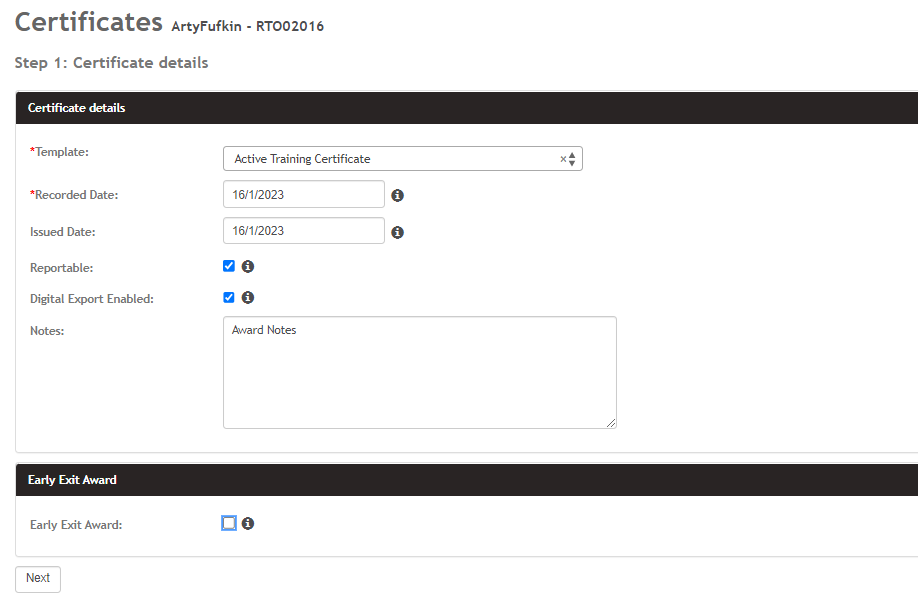 These are the new fields that can be accessed as the Certificate is generated:

Recorded Date - This will default to the current date and can be changed as required.

Issued Date - This will default to the current date and can be changed as required.

Reportable - Specify whether or not this Certificate is to be reported. This will inherit the value set on the Template, see below. The user can also overwrite this value if required.

Digital Export Enabled - For clients using the QVault integration, this setting will flag this award as being a candidate for creating a Digital Certificate.

When the relevant information has been entered, select the Next command to continue.

This part remains the same, for an Individual, choose the Enrolment(s) that need a certificate generated for:

Or on a course, choose the Students to generate a Certificate for:

Choose an enrolment, then select the Preview command

A preview of the Certificate will be produced:

If everything is produced as expected, click on the Produce Certificate command button to generate the award:

We have implemented functionality so that the default Certificate reportability can be managed directly from the template.

Certificate templates have a new Completion Award flag field. When set as enabled, any Certificates generated using this template will have the Reportable field for the Certificate enabled by default. 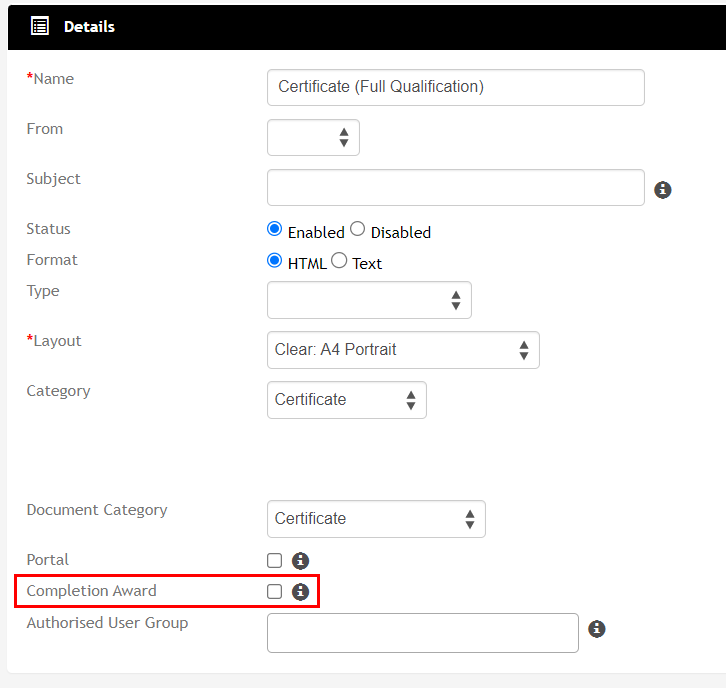 This feature is really designed to allow users to record the reportable data associated with an award that has been generated outside of the system. For example if your certificates using external software etc, Clicking on the Record External Award button, accessible from any enrolment, will allow you to enter the details for an award that was issued outside of the system.

You can enter the same information for a manual award as you would for one generated in the system. This allows you to include external awards in your government reporting. 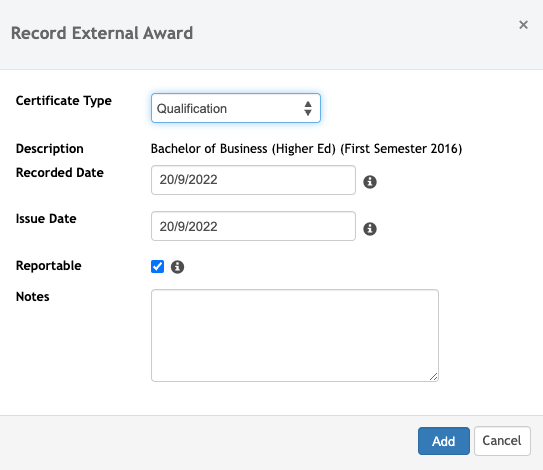 Note that External Awards will not be linked to a document and that will be highlighted when you access the Certificate pages as these Certificates will appear unlinked and without a template reference.

On deployment we will be updating some of the data fields within the system.

Firstly, all certificates recorded in the system up until the 18th January will have a new Recorded Date field populated from the creation date of the certificate.

We hope these new processes streamline your own and help to become more efficient when producing Certificates. If you have any questions or concerns please peel free to reach out to our support team.